Our understanding of the physical reality can never be final. We must always be ready to change these notions. 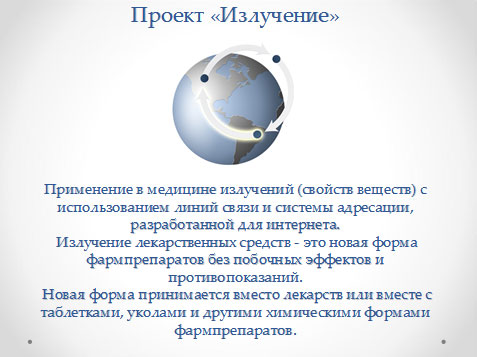 In cooperation with foreign colleagues we developed, tested and successfully implemented an innovative development – the GSK module, which is a test for early diagnosis of tumors.

The Irradiation project started in 1997 as a result of the Soviet scientists meeting in Israel – radio physicist Mark Greenstein and scientist Dr. Michael Shreibman.

The Irradiation project is based on the phenomena that have long been studied intensively by scientists from various fields of science such as quantum electrodynamics, chemistry, biophysics, biology, medicine and others.

Independently conducted theoretical work and experiments in the second half of the 20th century and early 21st century by scholars Landau, Preparata, Benvenist, Zhadin and others in different countries and in different science fields allow to suggest that a new natural physical phenomenon was discovered.

Numerous studies published in the peer-reviewed scientific journals have experimental direction that ensure the existence of these phenomena, as well as theoretical directions that reveal some patterns and establish mechanisms of the processes.

Integrative medicine - a medicine for the benefit of the whole organism, in the interests of people, not in words but in deeds?

Author techniques and algorithms for diagnostic use of BRT in combination with multi-level analysis?